Every kid loves a ride-on toy, right?  I would argue that most kids would also love a ride-on toy that smokes the tires without breaking a sweat.  My kids certainly have gotten a kick out of my latest project.

The stock Peg Perego John Deere Gator ride-on toy comes with a crummy 12v battery that lasts for about an hour and pretty much sucks all around.  I chose to replace it with two batteries.  One is a 12v 12ah and the other a 6v 12ah from Gruber Power.   They are wired in series (see photos below) to achieve 18v 12ah.   For those interested, my series wiring consists of: The system is charged using a MiniMoto 18v charger from Monster Scooter.   I then wired a panel mount charger port to the dash of the Gator.   I bought the port at Radio Shack for about $3. If you do go with the Radio Shack and Monster Scooter charger parts, make sure you wire them correctly! The positive is the outer barrel, negative on the inside.  The wiring to the port will need to be soldered.  I also recommend throwing some heat shrink tubing around everything to make sure it’s protected and stays dry.

Going from 12v to 18v is a pretty dramatic step.   I don’t have a good way to measure, but I think the top speed is nearly doubled.   I’d guess somewhere around eight mph?

There is one drawback to this setup, however.  The stock gearboxes, at least in my experience, are not able to take the added power on tough terrain.  If your kids are scooting around on pavement, that’s fine, but if they are going up and down steep hills or deep grass… prepare to shred a few gearboxes. 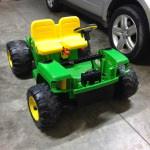 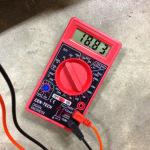 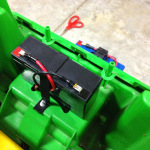 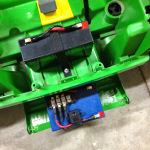 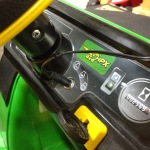